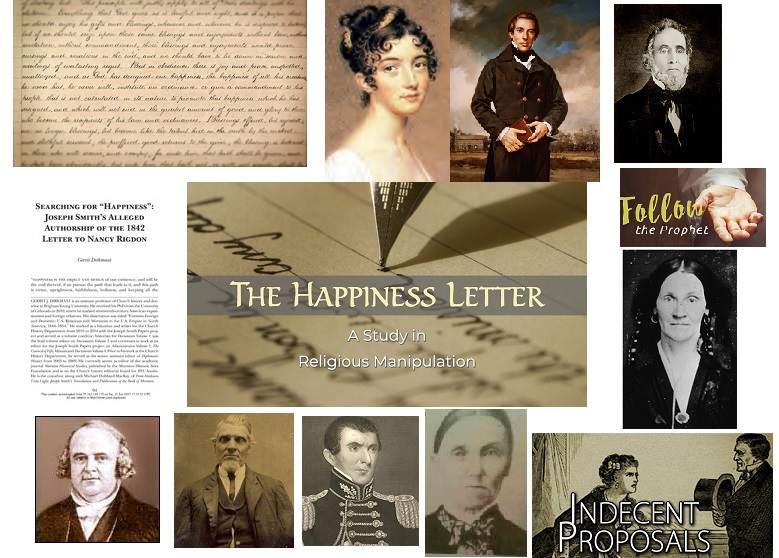 There are multiple examples of Joseph Smith’s manipulation of vulnerable women in order to pressure them into a polygamous relationships.  The Partridge sisters, Lucy Walker, Fanny Alger, The Lawrence Sisters.  Today we share the story of Nancy Rigdon and the Happiness Letter.  Nancy, Daughter of Early Church Leader Sidney Rigdon is a prime example of the mechanisms and manipulation that Joseph Smith would use on Young girls in order to pressure them into an intimate relationship.  Joining me are Chris Smith and Jonathan Streeter as they run us through the data and help us get the full context of this story and its surrounding events.Please check out the resources below.

Joseph Smith meeting the Rigdon’s and giving Nancy a blessing

Rumors of affair between Agnes Smith (Widow of the Prophet’s Brother Don Carlos) and Joseph Smith.  They were later sealed January of 1842, before the relief society was created.

Nancy Marinda Johnson Hyde commanded to live with others

1904 Letter by brother John Rigdon -Claimed that Joseph Smith mentioned that he had made a proposal to Nancy Rigdon and she turned around and spoke out about it.

John C Bennett sharing the Happiness Letter with the public

The Happiness Letter within the History of the Church

Additional context and quotes around the Happiness Letter by Van Hale

Discussion of Romans 7 and the Happiness Letter

Brigham Young sealed Martha Brotherton to himself with proxy

From the testimony of Catherine Fuller: (Quote where William suggest Catherine not get married and grant his sexual requests and he would continue to supply her sustenance)
“[William Smith] has also been to my house on the 27th of last month being the day I was married and proposed unlawful connexion but I refused and told him that it was contrary to the teaching of Joseph on the stand. He answered that Joseph was obliged to teach to the contrary on the stand to keep down prejudice and keep peace at home First W. Smith insisted very much that I should not marry and proposed to supply me with food &c if I should remain unmarried and grant his requests”

From the testimony of Sarah Miller:
“Some two or three weeks since, in consequence of Bro Joseph Smiths teachings to the singers, I began to be alarmed concerning myself, & certain teachings which I had recevd from Chauncy L. Higby, & questioned him about his teaching, for I was pretty well persuaded from Joseph[’s] public teachings that Chaney had been telling falsehood.– but Chauncy said that that Joseph Now taught as he did th[r]ough necessity, on acount of the prejudices of the people, & his own family particlarly as they had not become full believers in the doctrine.”

Example 1 of Pervasive Teachings of the Happiness Letter Theology
When Apostle George Q. Cannon preached: “I think that God has created us to be happy” in July 1874,6 he was also apparently referencing the still-uncited 1842 letter’s words (not published in Utah since 1855): “Happiness is the object and design of our existence …”7

Example 2 of Pervasive Teachings of the Happiness Letter Theology
Apostle John Taylor was also referencing the above (again without attribution) in his March 1872 sermon which referred to “revelation adapted to the peculiar circumstances in which they were placed,” followed nine pages later by his paraphrase about “revelation adapted peculiarly to the position that we occupy.”

Example 3 of Pervasive Teachings of the Happiness Letter Theology
“In October 1850, Orson Pratt’s Divine Authority of the Book of Mormon referred to “new revelation adapted to the peculiar condition of himself as an individual, and varied at sundry times, according to the change of circumstances …”

Example 4 of Pervasive Teachings of the Happiness Letter Theology
D. Michael Quinn
“Not until five years later did the Deseret News include in its serialization of “Joseph Smith’s History” the 1842 text that Apostle Pratt was obviously paraphrasing: “This is the principle on which the government of Heaven is conducted, by revelation adapted to the circumstances in which the children of the kingdom are placed.”4”

Example 5 of Pervasive Teachings of the Happiness Letter Theology
D. Michael Quinn
six years before J. Golden Kimball quoted from the “Happiness” letter in general conference, the Improvement Era of April 1920 printed Apostle David O. McKay’s sermon which announced: The guiding spirit of life was manifest from the beginning of his [Joseph Smith’s] ministry and confirms his wonderful declaration that God had spoken to him. In his own words[,] it is this: Whatever God requires is right, no matter what it is, although we may not see the reason thereof until long after the events transpire.8

Example 6 of Pervasive Teachings of the Happiness Letter Theology
Benjamin Johnson:
(From Johnsons autobiography)
He looked at me, oh, so calmly, and said, “Brother Benjamin, you will never see that day, but you shall see the day you will know it is true, and you will fulfill the law and greatly rejoice in it.” And he said, “At this morning’s meeting, I will preach you a sermon that no one but you will understand. And furthermore, I will promise you that when you open your mouth to your sister, it shall be filled.”
At the meeting he read the Parable of the Talents, and showed plainly that to him that hath shall be given more, and from him that had but one should be taken that he seemed to have, and given to him who had ten. This, so far as I could understand, might relate to families.”

Intimation of Teaching the keeping of Secrets
“Prest. Smith said all proceedings that regard difficulties should be kept among the members— as to the Institution, its objects are charitable— none can object to telling the good— the evil withhold— hoped all would feel themselves bound to observe this rule.”

5 thoughts on “Mormon Discussion: 342: Nancy Rigdon and the Happiness Letter”