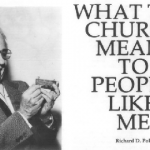 Poll wrote on various topics in Latter-day Saint history and thought. His religious approach was influenced by his studies at TCU, where he examined and rejected creationism, scriptural literalism, and prophetic infallibility. He remembered one professor saying “the purpose of religion is to comfort the afflicted and afflict the comfortable.” In 1963, Poll prepared a paper called “What the Church Means to People Like Me”, which he delivered in the Palo Alto Ward sacrament meeting in August 1967 and published in Dialogue: A Journal of Mormon Thought.
The paper drew upon Book of Mormon imagery. In Lehi and Nephi’s vision, people held onto an “iron rod” that followed a single path to salvation. In another story, a mysterious instrument, called the “Liahona”, pointed righteous travelers toward their destination. Poll’s paper set up a dichotomy between church members who see the gospel as clear and exact, or “hold to the Iron Rod”, and those who follow the guidance of the church as a compass to lead their lives.

The subject caught the attention of LDS intellectuals and leaders, becoming a poignant metaphor in cultural discourse. It would become Poll’s best known article, and was in republished several other times.